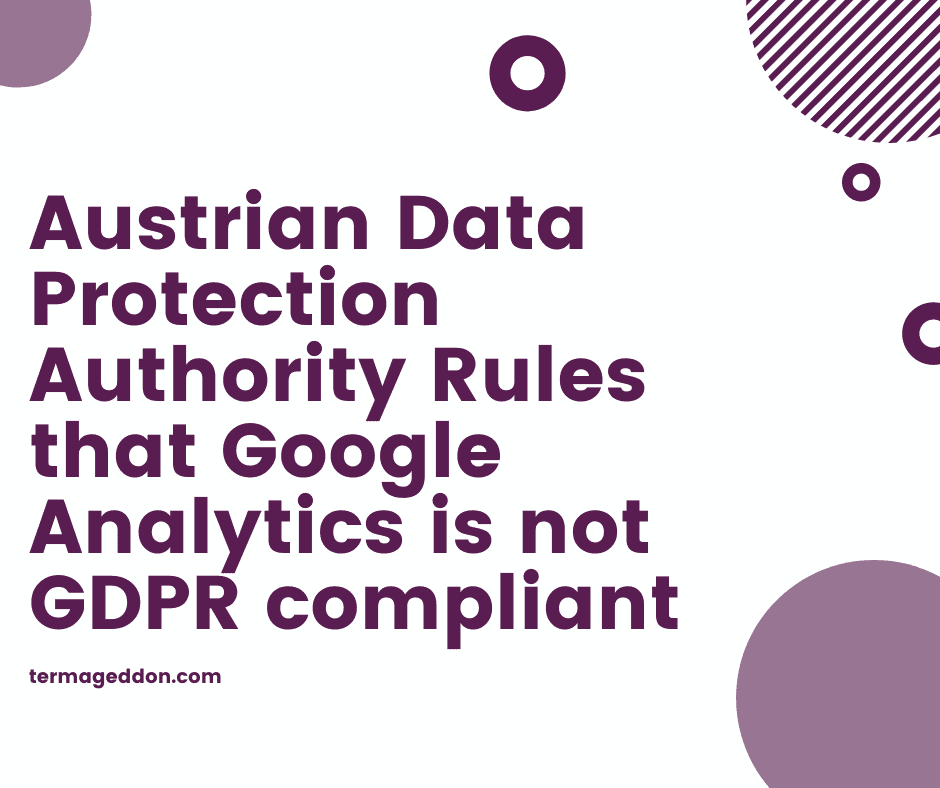 A recent decision made by the Austrian Data Protection Authority (DPA) ruled that websites that use Google Analytics are not compliant with the General Data Protection Regulation (GDPR). This seminal decision impacts millions of websites and exposes businesses to the large fines imposed for GDPR non-compliance. In this article, we will discuss who this decision applies to, the background of the case, and an alternative for privacy-focused analytics.

Which websites should avoid Google Analytics?

The decision made by the Austrian DPA concerned the use of Google Analytics and its lack of compliance with GDPR. GDPR is a privacy law that protects the personal data of residents of the European Union and provides them with certain privacy rights. GDPR applies to:

As you can see from the above, GDPR does not just apply to businesses in the European Union, but can also apply to businesses in other countries if any of the above factors are met. Thus, according to the decision made by the Austrian DPA, any business that needs to comply with GDPR should avoid the use of Google Analytics as such use will make the business non-compliant.

In 2020, Max Schrems, a privacy activist and the founder of NOYB (None of Your Business), an organization that aims to increase the enforcement of GDPR, filed a privacy complaint with the Irish Data Protection Commissioner. The complaint alleged that Facebook’s transfers of the personal data of Max Schrems from the European Union to the United States violated his privacy as data stored in the United States by Facebook could be accessed by US intelligence agencies. On July 16, 2020, the Court of Justice of the European Union held that such transfers do indeed violate GDPR and that the EU-US Privacy Shield was invalid for transfers of data because US intelligence agencies could still access the transferred data. The decision found that the EU-US Privacy Shield is invalid and thus can no longer be used for transfers of personal data from the European Union to the United States. The decision also found that companies that want to transfer personal data from the European Union to the United States need to ensure that the transferred data receives equivalent data protection to that in the European Union. Thus, instead of using the EU-US Privacy Shield, companies transferring data would need to have contractual requirements in place and to impose technical safeguards to ensure that the data is protected in the recipient country.

Google Analytics is not GDPR compliant

After the Schrems II decision, NOYB filed a complaint with the Austrian Data Protection Authority alleging that the use of Google Analytics by websites results in a transfer of the personal data of residents of the European Union to the United States, since Google is located in the United States. The complaint alleged that the data sent to the United States is available to US intelligence agencies, such as the NSA, in violation of GDPR. The complaint also alleged that companies like Google use contractual requirements to justify such transfers of data but that the contractual requirements are not sufficient to protect the data from US surveillance agencies.

The Austrian DPA made this decision regarding one of the 101 complaints filed by NOYB regarding the use of Google Analytics by websites, which means that we will see other DPA’s in other countries making decisions regarding such usage shortly. In fact, the DPA’s in France, Norway, and Denmark are already assessing these complaints. As the decision determined that data transfers from the European Union to the United States that allow US intelligence agencies to access the data are not compliant with GDPR, this decision will also affect other services commonly used by websites.

According to the decision by the Austrian DPA, companies that use Google Analytics are not GDPR compliant and thus need to find a privacy-focused analytics provider. We recommend using Fathom Analytics, which does not transfer data to the United States and provides a privacy-focused analytics tool that bypasses this decision. You can watch our webinar with the Fathom Analytics team here, in which we discuss this decision and how Fathom Analytics can help you avoid GDPR violations while providing stellar analytics insights. If you are switching from Google Analytics to a different analytics provider, make sure to update your Termageddon Privacy Policy as well.

Donata is the Co-founder and President of Termageddon, an auto-updating generator of website and application policies. She is a licensed attorney and Certified Information Privacy Professional. She also serves as the Vice-Chair of the American Bar Association’s ePrivacy Committee and the Chair of the Chicago Chapter of the International Association of Privacy Professionals. In her free time, Donata enjoys beekeeping, hunting for morel mushrooms, and walks with her husband and two dogs.

Termageddon is a generator of policies for websites and applications. When the law changes, so do the policies, keeping your company protected and allowing you to focus on more important things.